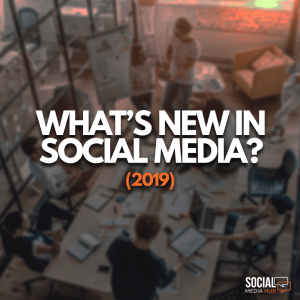 If January is anything to go by, 2019 is going to be a big year for social media.

Many platforms have been working hard to improve their networks and introduce new features, benefiting marketers by allowing them to advertise more efficiently.

Below we have highlighted some of the new features introduced by the bigger social media platforms in January this year.

This month Facebook has introduced changes to their advertisements. These changes allow advertisers to target an audience that have previously visited the businesses page.

The new feature allows advertisers to set their ads to adopt the language of the area that the ad is being viewed from.

Another feature released by Facebook this month is the addition of CTA buttons to their stories.

A swipe up menu can be added to a business’s story post with prompting buttons such as “Shop Now”, “Book Now”, “Call Now” and “Get Directions”.

This feature will allow users to contact brands/businesses a lot easier via social media as opposed to writing their own message.

In early January Twitter announced at Global Innovation Conference, CES 2019, that they are making adjustments to their analytics.

The new adjustments will allow users to monitor their analytics more closely such as tracking when their followers are most active.

They have also introduced a dashboard allowing users to monitor current trends enabling them to create content that will receive better engagement.

Instagram have recently announced a new feature that will allow business accounts to schedule video content using scheduling tools. But only the ones that are Instagram Marketing Partners such as Buffer and Hootsuite. Before this update only single image posts could be scheduled.

Another feature Instagram introduced this month is giving users the ability to post to multiple accounts at once. This will allow marketers with multiple social media accounts across the platform to post to all their accounts more efficiently. This feature can also be utilised by influencers who have a number of accounts.

Although it does raise concerns that it could result in a number of unfollows due to people receiving duplicate posts in their feed.

For more information on Social Media and how it can benefit your business, Click here.

Social Media Marketing bad habits your business may be making (and how to fix...